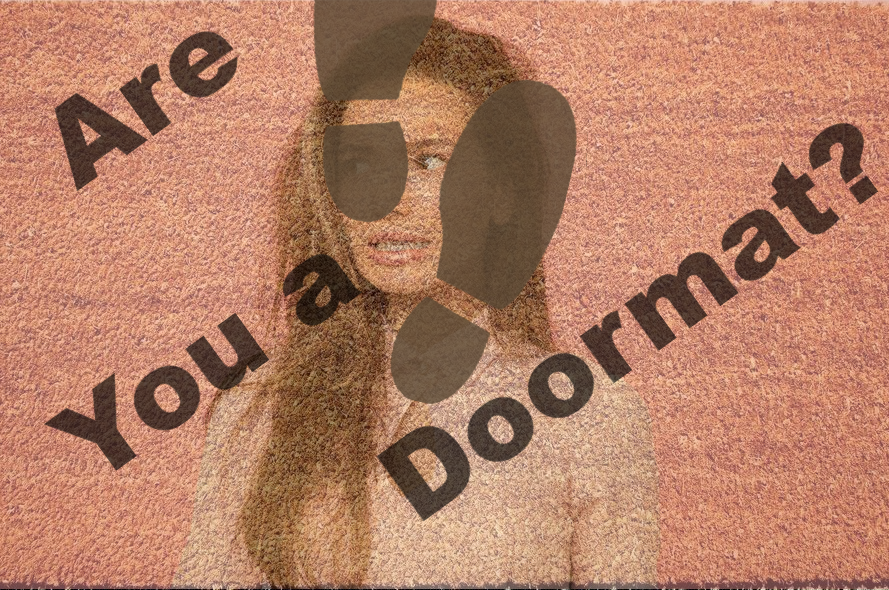 You are on the doormat when you allow your MLCer to create the boundaries which you follow rather than creating boundaries yourself. He can create boundaries for himself which you need to respect, but do not allow him to write your rules. What does that mean? If he wants to visit the children, you dictate whether he may visit them in your home or elsewhere and you give him the available times if he visits in your home. Court rulings may supersede either of your boundaries, so make sure that you have a lawyer who is fighting for your rights and protection as well as what is best for your children. Don't get on the doormat because your lawyer shoves you there--which is a clue that you need a different lawyer and is still your fault if you do not get off the doormat to find someone else. But also determine which battles to fight and resist and which to let-go. No one else is responsible for your being on the doormat.

Doormat behavior is also about denial and separation--again you are most vulnerable to this in the early weeks after Bomb Drop. If you will do anything to get him back, you are on the doormat. Doing anything is not the same as doing what it takes. Do not sacrifice your Self and your soul--who would want to return to a spouse like that?

Giving in to an MLCer's demands is doormat behavior; it is a place of desperation, where a person will do whatever it takes, meet all demands. Are you so desperate to have him around or to keep from angering him that an affair and abusive behavior becomes acceptable?

I am so worried about what he thinks of me that I let it control me.
I don't know if your MLCer will try to return someday. But he will not ever try and may remain nasty if you don't take back your Self-respect, confidence and Personal Power. He lacks Self-Confidence and is bolstering his deficiency by tearing you down. If you've fallen onto the doormat, you are allowing this tactic to work. What makes you think he will return if he is always getting his way? Because that meets his needs? If you are meeting his needs now, why should he change? Does he want a doormat for a wife?

Midlifers will fight boundaries, but they want them--consciously or subconsciously; sometimes they are secretly wishing for boundaries. We all need rules and guidelines. They test boundaries, and do not respect doormats--who are without boundaries. It's worse when you claim to have boundaries and don't stick to them--you'd better shape up or else. Or else what? It's an empty threat.

If they are aware you are Standing, MLCers will try to use your Love and Stand against you by promising to be nice if you meet his demands. If you bargain with him, you are on the doormat and once you begin breaking boundaries, he will take advantage.

Outside observers do not understand your Stand and do not see what is happening behind closed doors or within your head. Not everyone will be aware of your intentions or your MLCers actions and inactions.

We live in a divorce-happy society. No matter what there will be people who think that merely through the act of Standing or wanting your cheating spouse home you are on the doormat. For better or for worse has no real meaning to many people--including people who say it in their vows; they apply their values to you and if you don't follow their values and belief systems there is something wrong with you; you must be weak. Why would you want someone who mistreats you? They don't understand that you do not want the mistreating Monster. Why would you believe he will change then? If the Monster is a new MLC personality, you have good reason to believe the Monster is not permanent.

Understand also that your friends and family care for you and it hurts them when you are hurting. They want your pain to stop and they see your actions as prolonging it. They may be right, in some ways Standing may prolong. MLC takes years, whereas a divorce can take weeks--though the pain is not over in weeks. But Standing does keep you involved--even with No Contact. It keeps your heart open which is a vulnerable position. Even detached, Standing can be painful and risky because though you are moving on and you may have a full life without your MLCer, you are not accepting closure. Divorce is a form of closure and you may or may not be divorced, but if you are Standing you are wanting to remain married or to remarry your MLCer and you may not acknowledge a legal divorce. Some people look at you with disgust--which is a fear; they hold disgust because they don't want to be like you and for some they project disgust because they hope that if you feel their disgust you will change your actions by getting off what they see as the doormat. Recognize the love in their concern and let them have their opinions. Defend yourself if you must, but often being defensive is a sign of insecurity with your actions and others will see it as such. Accept that not everyone will agree or understand why you are Standing and it is best that you not discuss it with those people. Find a confidant who whether they agree or not, accepts your actions--but who also will tell you when they are concerned that you are harming yourself or your children.

We validate, love unconditionally and they act like we are the bad guys.
I wonder sometimes if this is the right approach.
Are we reinforcing negative behavior????
Unfortunately the answer is often Yes.

As with everything in life, Standing is about balance. Imagine if you did not validate or love unconditionally. What if you took the extreme opposite and told him everything he did and felt was completely wrong and hated him without condition. That isn't Agapé and wouldn't bode well for reconciliation either.

Grace, Agapé and Forgiveness are not a doormat without consequences; they are gifts you give your Self and others. Be soft and conciliatory--validate and affirm; Accept the process of the journey. The challenge is that there is a fine line between these things and being an enabling doormat. Others, in their lack of compassion and understanding may view your Stand as doormat behavior; they may lose respect for you because they feel that your actions show you lack Self-respect. Honor your Self, honor your principles and beliefs.

Fight for your marriage by not fighting. Treat your spouse with respect, dignity and love--Tough Love is kind. Love him, forgive him and let him find his own way home. Standing is not about the doormat; it is about Passive Resistance. Did Ghandi live on the doormat? Did Martin Luther King Jr.? Did Jesus? All of them were standing up for something in which they believed and for all a core belief was love.