Is it normal to have get even feelings?
It is probably abnormal not to have those feelings--that would be where hell hath no fury like a woman scorned originated. You don't need to act on the feelings. You will go through these feelings and release them; hell hath no fury like a woman scorned is not the anthem of a Stander. But it is normal. Accept that and you will get through it. The scorned woman is not created by the MLCer's choice of partner. It is a scripted role of anger and vengeance. Who will be the woman scorned; you or the alienator? You get to choose.

I thought I was doing so well. Then I got kicked in the gut today; he's been having an affair this entire time. I honestly never thought my husband would do this. How stupid is that?
It's not stupid. You want to trust your husband. Fidelity was part of your marital agreement. Even amidst suspicious behavior it is natural to trust. It is normal to want the man you married to be different than all those others that make up the statistics.

Some learn their MLCer is having an affair at Bomb Drop or before, others recognize the signs of MLC in the absence of an affair or the absence of knowledge of an affair. They may learn that MLCers have affairs and thus learn to expect infidelity, and possibly prepare for an eventual shock. When there is suspicion without knowledge of infidelity, paranoia can set in. Where is he now? Is he with someone else? What's he doing now? This same set of questioning plagues other Standers, but mostly those whose spouse is either living separate from the alienator, or when there is only suspicion of an alienator. If an MLCer is living with the alienator, why ask where he is--he's with her! Confirming a suspected affair is devastating and yet also a relief--after the initial shock. Knowledge makes letting-go easier when you are no longer wondering is he or isn't he. But give the shock time: days or weeks for some, months for others.

Let yourself feel the pain. Let it wash over you and take some time to cry. Only in accepting this and letting it wash through you can you release it. An affair is not the end of the world. It is not the end of your marriage--if you do not want it to be. But it is the end of the rose-colored glasses. I'm so sorry. You felt luckier than most LBSs. Your husband wouldn't do those things. Sure, he's having a midlife crisis, but he would never cheat. He's too good, too upright, too honest. Now you have learned that he is no better than those other cheaters.

It is not healthy to obsess over the alienator, but it is normal. You already know she's low because she is dating a married man. Let-go, stop pressuring him and give him space. He can then look back toward you and she can show herself to be the jealous and conniving controller that alienators are by nature. But to stop pressuring and give space you must feel healthy and strong with in yourself. That is the greatest survival mechanism. Love yourself, for those who truly love themselves are incapable of hating others. Stand tall, and be an example of love and forgiveness. The alienator is not a bad person, she is a broken person. You don't have to like her or approve of her behavior. You don't have to accept her as a permanent fixture in your MLCer's life; what you need to accept is the alienator as a part of the process of midlife crisis. But before you get to this level, you might hate her.

Why and how could a woman do this to another woman? How can she be so selfish, cruel and uncaring? Doesn't she see what she's doing? Doesn't she care who she is hurting?
Men are creatures of honor; they believe in a fighting equals and refuse an unfair fight--there are rules in warfare. For women, the battlefield is love and there is no honor. A woman's war is without rules; the weaker the adversary, the better. A woman waits for her opponent to fall so she can kick her or for her to turn away so she can insert a knife in her back. alienators will show you no mercy.

Projecting negatively onto the alienator is toxic to you. I know you don't want to like her; you don't want to understand or forgive her and you wish she were lying in the gutter where you could walk by and crush her beneath a beautiful stiletto heel. I know, you not only want her to rot in hell, but you'd like to drive her there. I'm not speaking from an isolated world of academia where I learned about infidelity from studying books. I lived it too; I know from my own experience and from working with others that projecting hatred is more poisonous to the projector than the object of projection. You don't have to like the alienator or be her friend, but projecting negative hatred energy onto her keeps you stuck. The alienator's behaviors are indicative of dysfunction and poor choices, not character flaws. You will know you are making progress when you feel indifferent toward her and are without the energy of emotion.

But my husband is living with her. Doesn't that mean that she now has the power?
Yes, if you act and believe it does. So act and believe in your power and you will be in your power. Why? The love triangle script is ancient and we all know it even if not consciously. The alienator expects you to follow script and become weak when she is in possession. By not sticking to script she reverts to her lower-status disempowered role. She thought she had dethroned the queen. Continue to carry yourself with the grace and dignity of your royal status and remember the fate of Anne Boleyn--heads will roll. 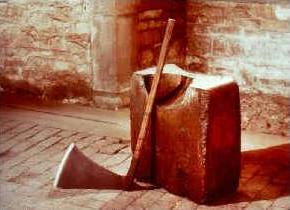